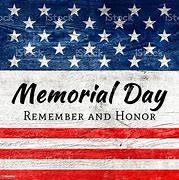 We will be closed on Monday May 31st in observance of Memorial Day.

Thank you to all who served.